Calculating the Educational Impact of COVID-19 (Part III): Where will students be when schools reopen?

In May 2020, RTI examined early grade reading data from 27 datasets across 8 countries (which we have since updated to 87 datasets from 15 countries). These datasets all contained data for students in consecutive grades (e.g., grades 1 and 2; grades 2 and 3; etc.) and were used as a starting point for us to model the impact of COVID-related school closures on learning loss.

This blog continues and expands on our initial analyses by predicting where students will be once schools have re-opened after the COVID shut down.  Via targeted briefs, this work has already helped government officials, stakeholders, and teachers in several countries plan for needed remedial programming and catch-up programs for school re-opening. In order to understand student needs at all levels of performance, we have focused this work on student distributions at restart, rather than average scores (i.e. student means). Distributions help show how widely the students’ abilities vary, which in turn help ministries understand the numbers of students that fall into different reading levels. This is essential for planning successful remediation programs.

While results vary, we found that for the majority of countries, students can be expected to return to school up to a half of a year behind where they were when the school year was interrupted and more than a year behind where they would have been without school closures. Two things contribute to the severity of this learning loss. First, the abrupt disruption of the school year meant that students missed out on the learning that would have occurred had schooling continued. If the mid-March closing of school occurred in the early part of the school year – as in countries that begin school in January – then a significant amount of learning opportunity was foregone. Second, not being in school, and not having access to alternative learning opportunities (the sad reality for most students), the skills students had will deteriorate, and deteriorate more as time away from school increased.

Students who are the least likely to have the means to learn while at home, and those with the least solidly developed skills, sadly, are the ones who will have regressed the most, as shown in our examples below.

Our model for predicting student reading ability at the restart of school is based on the following parameters:

In this section, we present data from eight different countries: four where the COVID break occurred late in the academic year (i.e. ‘late disruption’) and four where it occurred early in the academic year (i.e. ‘early disruption’). We chose these specific countries for this blog because they vary in the length of school closure and reading ability by grade, while also providing broad geographic representation. Table 1 introduces the countries, and their specific parameters used in our model.

Table 1: School calendar inputs used to help determine where students will be once schools reopen.

Using the school closure information provided in Table 1 along with student performance data from a typical school year, we are able to create distributions of typical learning gains, expected learning attainment at the time of school closures and predicted losses suffered before returning to school. We use Jordan as an example in Figure 1.1-3, to show what these distributions look like and how we can understand the expected student reading ability upon returning to school.

Figure 1.1 presents the cumulative distributions of students’ oral reading fluency (correct words per minute) based on actual data from a typical school year. The blue line represents end of grade 2 scores, while the black line represents end of grade 3 scores. These data were collected at the same time point and therefore the gap between the two lines represents the collective learning gain of the grade 3 students.

Figure 1.3 has the inclusion of a fourth line. The red dotted line represents our model’s predicted student fluency when school reopen this is the distribution, we are most interested in.  The gap between the two dotted line represents the learning losses suffered because of school closures. In this example, grade 3 students will have regressed back to where they were when they finished grade 2 (i.e. approximately where they began grade 3 the 2019-20 school year).

In Figure 2, we show these distributions for the late disruption countries.

Figure 2:   Learning loss for countries that closed late in the academic year.

Note: School return dates are not been finalized in all countries.

Our model predicts that when late disruption schools return, the students will have regressed to a point somewhere within their same academic year, typically close to the beginning of the school year.

Figure 3: Learning loss for countries that closed early in the academic year.

Note: School return dates are not been finalized in all countries.

Because the early disruption schools completed about one-fifth of the academic year, our model predicts that most students will return to school looking more like students in the middle or close to the end of their previous grade.

Because the early disruption schools completed about one-fifth of the academic year, our model predicts that most students will return to school looking more like students in the middle or close to the end of their previous grade. For example, Uganda grade 3 students completed only 17% of the 2020 academic year and are expected to be out of school for 45 weeks. Our model predicts that when they return, they will look more like middle of the year grade 2 students. Grade 3 students in El Salvador will resemble students who have completed about 85% of the second grade. And grade 2 students in Kenya, having been out for 41 weeks, would resemble grade 1 students who have completed about three-quarters of grade 1. It is only in Tanzania where the learning loss looks minimal, given they were out of school for only 17 weeks.  Grade 3 students in Tanzania are very close to resembling end of year grade 2 students, (start of grade 3)—much like the late disruption schools, above.  However, our model predicts that Tanzania and the other early disruption countries will have an increase in non-readers when compared to the end of the previous grade (i.e. start of the current grade).

One of the most alarming aspects of our model, is its prediction of the proportion of students who will not able to read a single word when they return to school (i.e. non-readers). We estimate these increases based on the proportion of students who did not attain high enough oral reading fluency scores to ensure a level of reading security. More specifically, students reading fewer than 10 correct words per minute at the time of school closures are estimated to regress back to nonreader status because of extended school closures. In seven of the eight example countries, our model predicts that there will be a larger proportion of grade 3 students not able to read when schools reopen than when schools started the year prior to COVID (as shown in Figure 4, where the gray bars are taller than the blue bars). In those seven countries, the predicted increase in the percent of nonreaders from the time of school closures to school reopening ranged from 14 (Ethiopia) to 38 (Uganda) percentage points (difference between the orange and gray bars). In the Philippines, we predict a much smaller increase in nonreaders (3 percentage points). This is due to the fact that students were nearing the end of grade 3 by the time of school closures and most students were reading with sufficient accuracy and fluency in order to at least maintain some basic reading skills that will allow them to return to school with some reading ability.

Figure 4: Predicted percentage of non-readers at the start of the school year, at school closure, and upon school reopening. 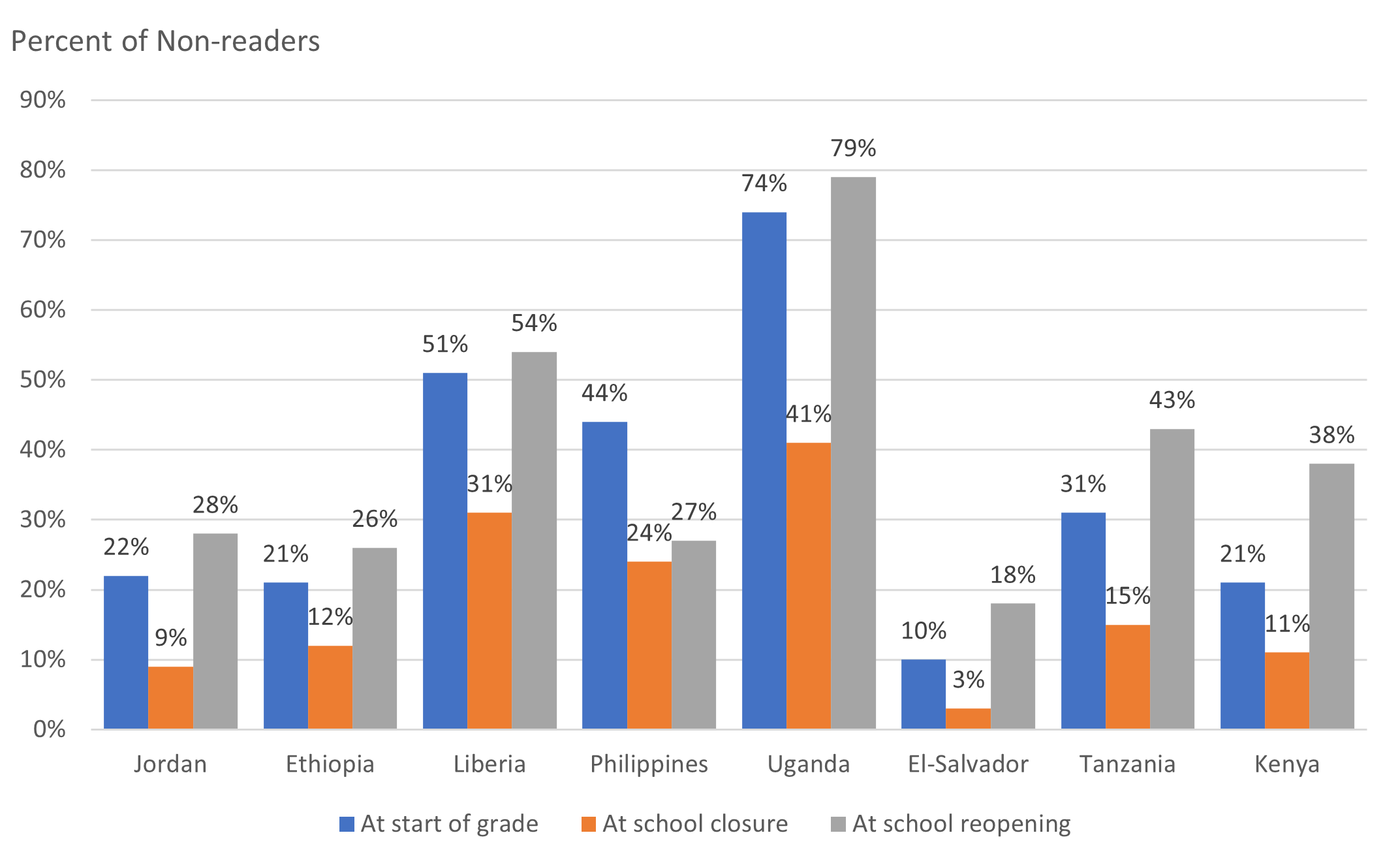 To date, we have met with stakeholders and/or ministry officials from Cambodia, Ethiopia, Jordan, Kenya, Philippines, and Nepal to discuss the implications of this work. We have presented our model and begun dialogues around how best to address the concerning findings. Ultimately, we are focused on two main messages.
First, students will not be at (or near) the same level of reading ability as when schools closed down in March 2020. When they return to school, they will require an intensified remedial program just to get back to where they were before schools closed. For early disruption countries will require significant remediation efforts to get students back to where they were at the start of the 2020 school year. These remediation efforts should be focused both on the starting point of lessons (i.e. returning to prior material), as well as the pace of lessons moving forward. In other words, it will not be sufficient to simply pick up where things left off, nor is it advisable to continue through the curriculum at a typical year’s pace—due to both the need for additional ‘catch-up’, as well as the impact COVID will likely continue to have on teacher and student psychosocial well-being upon returning to school.

Second, addressing the increased proportion of nonreaders and those at the lower end of the learning distribution should be a particular focus of all systems. These students are predicted to have suffered the most significant losses during school closures (due in part to their lack of access to the same learning opportunities typically available to less disadvantaged students). This has served to further widen the gap between lower and higher performing students. If this is not addressed at school restart, these students are at risk of continuing to fall further and further behind their peers.

We will continue to meet with donors, government officials and stakeholders to share results for their respective countries.

As schools reopen, we hope to collect data as soon as possible to validate our predictions with real data.  We welcome all collaboration with interested parties.  If you have learning loss data and are interested in collaborating, or if you have any questions, please email the authors.

This blog was co-authored by Christopher Cummiskey, Jonathan Stern, and Joe DeStefano.

Christopher Cummiskey is a senior statistician, research design expert, and evaluation specialist in the International Education division of RTI International’s International Development Group. Mr. Cummiskey has over 12 years of survey design experience and leads a team of statistical and evaluation experts at RTI. He works with ministries, implementors, and clients to develop research questions, research and sample methodologies, and data collection protocols. Once the data are collected he and his team processes the data and conducts all statistical analyses. Mr. Cummiskey holds a Master of Public Health degree in biostatistics and has professional experience in survey research for international education, health, and economic development studies. He is currently the co-chair of the Basic Education Coalition’s Monitoring and Evaluation group.
Contact Christopher Cummiskey