Some thoughts on scaling up and sustaining early grade reading programs 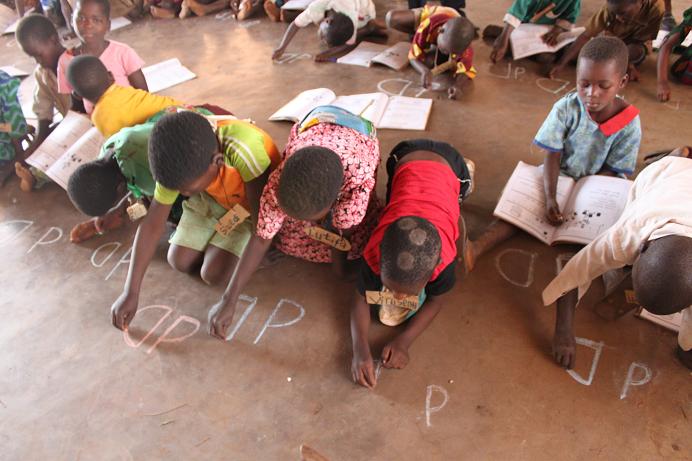 Much donor effort has gone into developing evidence-based early grade reading (EGR) programs. Now donors are striving to scale them up. RTI has been exploring these issues with support from USAID since 2012 and recently published this review of scale up efforts in seven countries. In our analysis, we found that as these scale-up efforts proceed, many are encountering implementation fidelity problems: the EGR programs are not being implemented as well as they were during the pilot that proved that specific blends of various inputs produced a set of significant learning outcomes. Implementation fidelity problems are manifest when, for example, teachers are not trained with the same intensity and/or coaches do not coach as often as when these occurred during the piloted evidence-based EGR program. This implementation fidelity problem arises largely because as scale-up occurs, most efforts must rely more and more on government actors, implementers over whom these efforts have little control. When government actors do not implement in the manner set by the evidence-based program, it can be attributed largely to 3 factors: 1) they may not know how to do what they are being asked to do, 2) they may not be able to do it, or 3) they may not choose to do it.

When government actors do not implement in the manner set by the evidence-based program, it can be attributed largely to 3 factors: 1) they may not know how to do what they are being asked to do, 2) they may not be able to do it, or 3) they may not choose to do it.

The first factor can be addressed through better and/or more training: more tightly coupled training-of-trainer cascades, or follow-up training, or through more coaching. We realize that by offering follow-up training, or more coaching, implementation fidelity is not being realized, but in these instances, one is doing more than what was done during the pilot, so this does not present itself as an implementation fidelity problem. The second factor requires a mapping exercise that identifies the institutional, systemic, and organizational gaps and barriers that prevent government staff from doing what is required of the scale-up effort. Once identified, measures must then be taken to fill those gaps and/or remove the barriers. For example, an EGR program may require teachers to be coached 4 times every semester. However, the coaches’ job description may force them to do a lot more than this, leaving them insufficient time to coach the required amount. For government coaches to do the required amount of coaching, measures must be taken to address this barrier. The third factor requires working with the government to put in place institutional forces that serve to motivate staff to do the work. These may include career ladders premised in part on performance tied to the work, incentives, and accountability mechanisms.

As EGR programs go to scale, attention must also focus on sustainability: enabling the government to sustain the EGR program once taken to scale. But what exactly does this entail?  The government must be able to do much of what an effort did to develop and implement the evidence-based EGR program and take it to scale. We offer the following capabilities as an example:

When one reflects on all of this, one can say that an EGR intervention and scale-up effort model an effective Core Functions (Crouch and DeStefano, 2015) curriculum implementation system. Granted, the effort may work through some government systems, but unless measures are taken to ensure that the government can do what the project is doing—operate a CoreFunctions curriculum implementation system, sustainability will not likely happen.

Unless measures are taken to ensure that the government can do what the project is doing—operate a Core Functions curriculum implementation system, sustainability will not likely happen. 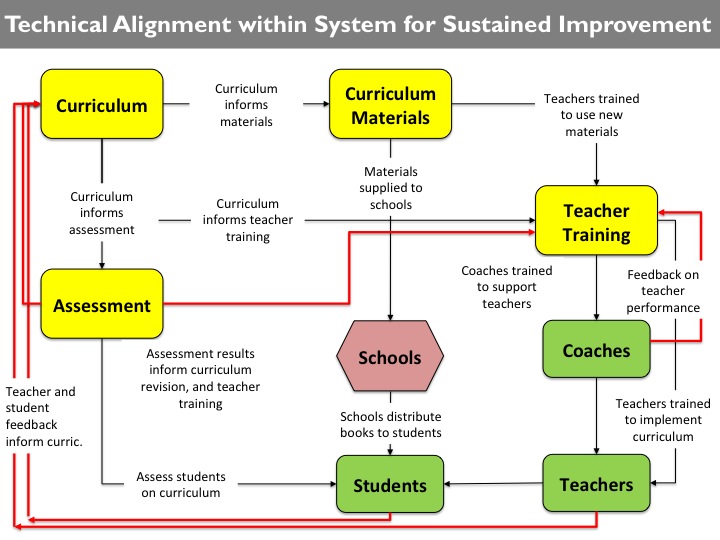 So, if the government is to sustain an EGR program, it pretty much must be able to do A-M above.  When faced with the task of systems reform one can be overwhelmed by the task; after all, an education system is a seemingly endless array of nodes and linkages. To simplify the task, especially as it relates to high-quality teaching and learning, one can take the Core Functions approach. The core functions of a viable teaching and learning system are:

The expectations/standards should largely be about learning: what children need to learn/do to be able to read with comprehension. Expectations can also be about the performance of people within the system to help those learning standards be met (i.e., a 10% increase in the number students who meet learning standards). These standards are to be communicated throughout the system such that all actors know what is expected of them. Moreover, these curriculum standards should also be communicated through curriculum materials, teacher training programs and materials, coaching, coaching tools, student assessment instruments, and M&E systems. Put another way, these things must all be aligned with the curriculum learning standards. When they are so aligned, and when all actors in this Core Functions EGR curriculum implementation system are working to help children meet the learning standards put forth in the curriculum, the system is said to be learning coherent (Pritchett, 2016).

Metaphorically speaking, one could say that the best practice curriculum materials, teacher training programs, coaching templates/tool, data systems, and student assessment instruments that an EGR program develops are finally crafted square pegs, and that the donor-sponsored scale-up effort creates the “square holed system” within which these square pegs can be utilized as intended. If the exiting and oftentimes dysfunctional government curriculum implementation system can be likened to a set of corresponding round holes, then sustainability is about a) transforming that round-holed system into a square-holed system, and b) institutionalizing those square pegs.

Browse other RTI resources on scale and sustainability here.

F. Henry Healey has worked to improve developing country education systems from a policy, systems, governance, finance and/or political-economic perspective. He brings a repertoire of skills to this work, including policy, systems, financial, and budget analysis; visioning, strategic planning, school improvement planning, and financial planning; individual, institutional, and organizational development including training and training systems design, and policy/reform development; policy implementation and reform support; policy dialogue, advocacy, and constituency formation; as well as computer modeling, proposal writing, and project management. His work has focused on administrative, political and financial decentralization for improved education service delivery, performance, and accountability. This work has involved the development of funding formulas, the creation and institutionalization of social accountability linkages, the design of accounting and reporting mechanisms, and the formation of widely owned visions (detailed delineations) of high-quality decentralized education systems toward which policies, reforms, and plans can be oriented. Dr. Healey’s work has also focused on scale-up and sustainability, both in general and as they relate to early grade reading programs; specifically, the systemic and institutional “requirements” of successful scale-up and sustainability and their costs.
Contact F. Hank Healey