School-Related Gender Based Violence and Repetition in the Early Grades 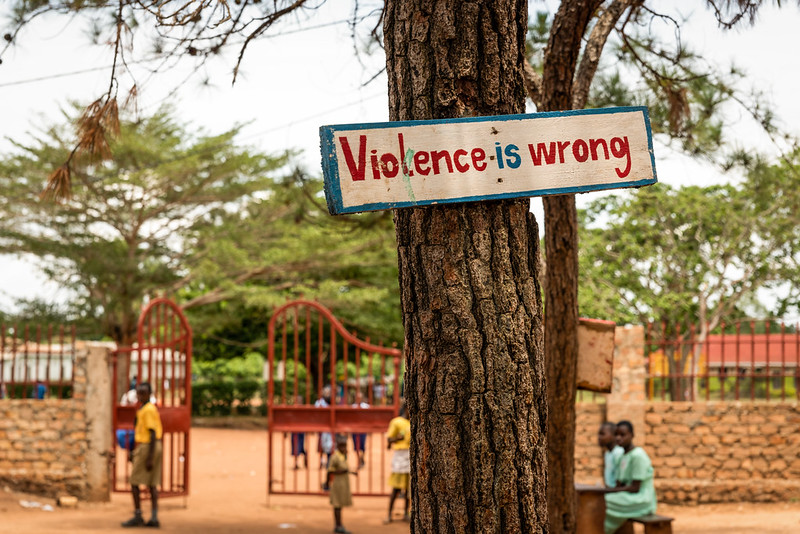 School-Related Gender Based Violence (SRGBV) is an epidemic around the world. Over 246 million children and adolescents worldwide have experienced physical or psychological violence (including bullying, corporal punishment, and sexual violence) when traveling to and from school, on the school grounds, or in the classroom (Plan International). Research in the past decade has shown that both the actual experience of and fear of encountering violence leads to reduced learning outcomes (Kibriya 2017, Khuwaja 2018), but there is surprisingly little data that looks at the interaction of SRGBV, performance, and repetition in the early grades.

To better understand this relationship, we review some thought-provoking data from RTI International’s ongoing longitudinal study in Uganda under the USAID-funded Literacy Achievement and Retention Activity. This study tracks longitudinal trends on a variety of cognitive and non-cognitive variables, including reading outcomes and experiences of SRGBV from Grades 2 to 4. Using the data from occasions 1 and 2 of this study, we found that 140 of the 1,084 pupils in our sample (13%) were repeating Primary Grade 2 (P2) when we returned in 2019.

The data reveals that pupils who were promoted from P2 to Primary Grade 3 (P3) saw a larger decrease in their experiences of bullying and sexual violence than pupils who repeated P2. Typically, pupils who are struggling to learn are held back in order to obtain a learning boost. Our data shows, however, that a high proportion of repeaters are still unable to read a single word after a second year of instruction in P2. 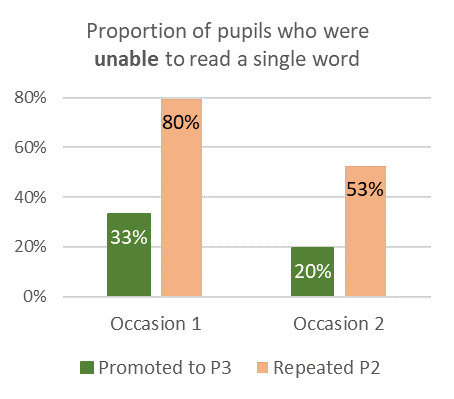 Before reading on, we challenge you to pause and reflect on the following question:

Imagine a primary school where there are high levels of bullying, corporal punishment, and sexual harassment or assault. What could be the implications of a pupil repeating a grade in this environment?

What does the data tell us?

As expected, reading outcomes were significantly different for repeaters vs non-repeaters. About 80% of the pupils who ended up repeating P2 were unable to read at occasion 1, compared with 33% of those pupils who were promoted. At occasion 2, 53% of the repeaters were still unable to read, compared with 20% of those that had been promoted. Pupils who were given an extra year of instruction in P2 were not catching up at the rates we would expect. 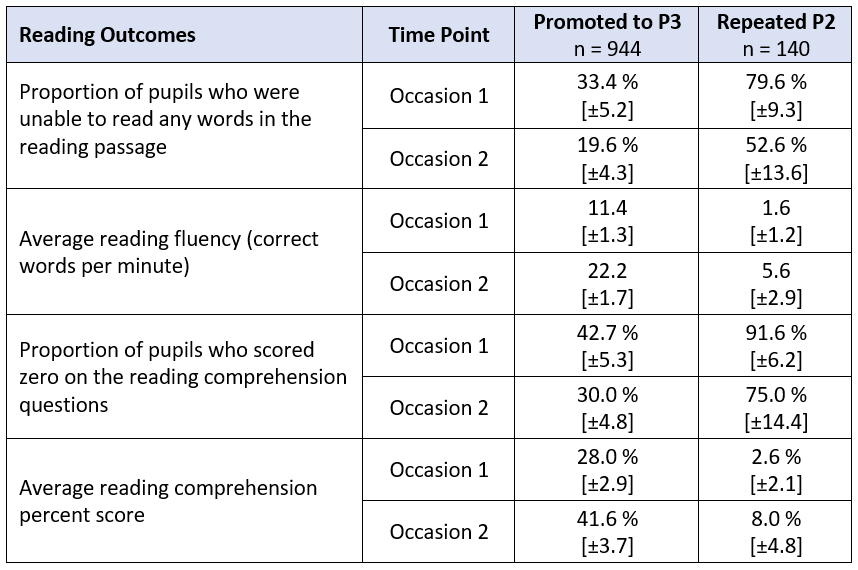 Finally, the reported experiences of violence data shines light on an interesting pattern between repeaters and non-repeaters. (Note: Indices were derived using the factor loadings of the survey items for bullying, corporal punishment, and sexual violence and are used to measure change over time. We use these indices for our analysis here.) We see that the bullying index decreased by a larger amount for the pupils who were promoted than for the P2 repeaters; the same is true for the sexual violence index. Interestingly, for the corporal punishment index, repeaters saw a larger decrease than those who were promoted. 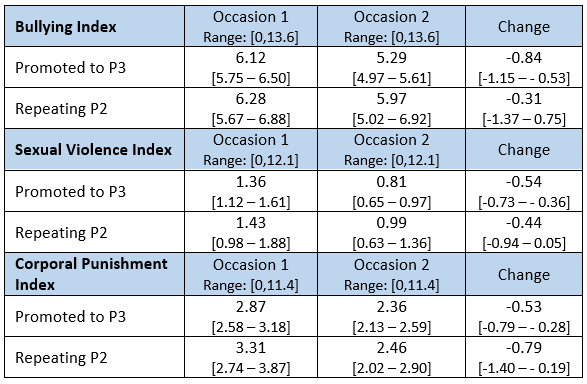 There seems to be an association between repetition and not seeing a reduction in the level of bullying or sexual violence experienced. Prior research supports this notion and indicates that rates of violence decrease in the later grades, implying that if pupils remain in P2 (where there is more violence), they are more susceptible to experiencing SRGBV than their peers who were promoted. Repetition, which is meant to support pupils’ learning, ends up being a double-edged sword.

How can we address this?

It is important to note that the solution to this issue is not straightforward. Schools are complex environments – the school climate, tolerance and presence of violence, and pupils’ performance in school are inter-connected. Will an additional year in P2 prove to be effective in teaching children how to read? What factors could be hindering the impact that repetition is meant to have? Can we address those factors to ensure the additional year in P2 is fruitful? (Or better yet, to reduce the rate of repetition). We also have to ask ourselves what large-scale consequences this double-edged sword could have on an education system that sees high rates of repetition in the early grades.

It is evident that more research is needed. The findings presented here are merely observed trends in the longitudinal data, and our smaller sample size for repeaters limits the strength of any statistical significance testing. In order to ensure the success of pupils in the early grades, we must commit to better understanding the multitude of factors that could impede on their learning, including this relationship between repetition and experiencing violence in school.

This blog was co-authored by Maitri Punjabi, Elizabeth Randolph, and Chris Cummiskey.