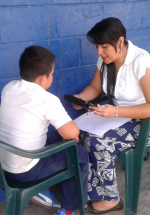 The El Salvador Early Grade Reading Assessment (EGRA) was conducted in 2018 in late June and early July 2018 (toward the end of the El Salvador school year, which runs from January to October). The objective was to provide the Government of El Salvador with information on the reading performance of public school students in second and third grades. The sample was designed to represent government schools at the national level with a minimum enrollment of six students in each of the second and third grades and all of the second and third grade students in these grades. EGRA is an individually administered oral assessment of foundational reading skills; in Spanish, the skills tested include letter sound identification, familiar word reading, and oral reading fluency, among others. Closing early learning deficits in contexts like El Salvador is critical to improving economic development. According to a World Bank review of the causes of dropout in Central America, skills gaps that are not corrected through additional support and remediation compound over time. Students with weak foundational skills are more likely to struggle and become disinterested as content becomes more complex. As students age, they also face rising direct and opportunity costs and increased risk of teenage pregnancy and violence. Together these factors are associated with higher levels of grade repetition and school dropout. Analyzing El Salvador household survey data, the same report indicated that 40% of youth who had left school cited lack of interest while 25% reported economic causes as the main reasons for dropping out of school. Among girls, personal reasons, including pregnancy and caring for younger siblings, are the highest reported cause at 32%. The EGRA results indicate that 49% of second graders and 40% of third graders are reading at or below a rate of one correct word per second. Students performing at this level for oral reading fluency are identified as “At Risk” for developing later reading difficulties, and potentially school failure. This means that additional remediation steps, such as intensive instruction and frequent progress monitoring, are needed to increase the chances that these students catch up with their peers. Early skills gaps are associated with higher levels of grade repetition and in contexts like El Salvador, where primary completion is not universal, school dropout. On nearly every component of the assessment, boys, students in rural schools, students from lower-income groups, and students with some form of self-reported disability all scored lower than their more advantaged peers. Income disparities were especially noteworthy: Students in the lowest income group were more than three times as likely to score zero on the oral reading fluency passage relative to students in the highest income group (20% versus 6%).
Download (6261.9 KB)
Tweet