Examining the evidence in boys' underachievement in education 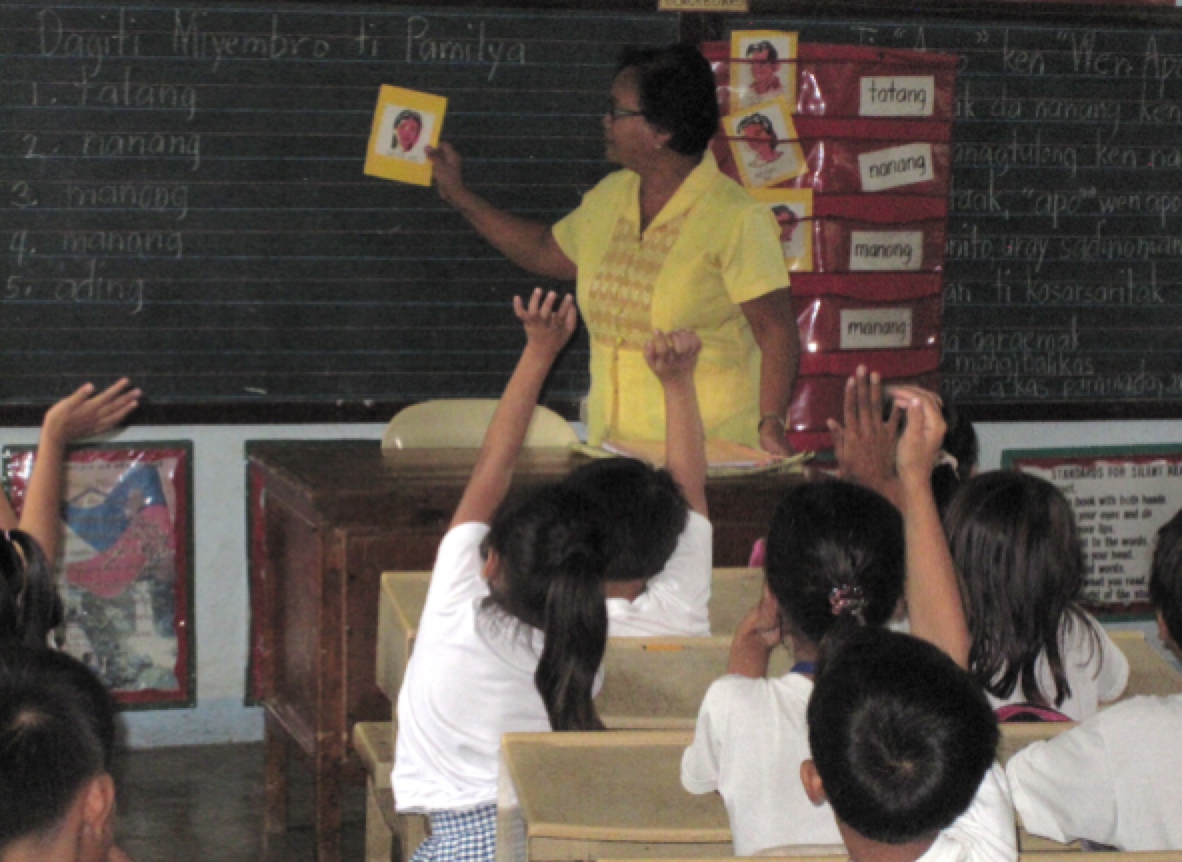 A recent paper published under USAID’s Education Data for Decision Making Project (EdData II) reviewed the literature on boys’ underachievement in education (find it here).  After examining the available studies on how and why boys underperform compared to girls in many education systems, the authors Jyotsna Jha and Sarah Pouezevara, conclude that,

“Gender stereotypes, gendered socialization, and gendered expectations both at home and in school are considered to be the main reasons for this trend to have emerged and be sustained so consistently across different contexts.” (pg. 37)

This is not to say that girls in many parts of many developing countries no longer face barriers to access, achievement and persistence in school.  It is merely recognizing that some aspects of how boys are socialized are contributing to their lower performance (compared to girls) in educational achievement.

Inspired by the work of Jha and Pouezevara, I decided to take a look at how gender impacts early grade reading performance in several of the countries where the EdData II project has completed early grade reading assessments.  With the help of my RTI colleagues, Marissa Gargano and Chris Cummiskey, I compared how boys and girls perform in oral reading fluency (ORF) across five countries.[1]  In addition to gender, we took into account other variables that we suspected would influence reading performance in early grades.  These include attending preschool, being the correct age for grade, being absent the previous week from school, and the socio-economic status of the student’s family.

The amount by which boys on average underperformed compared to girls in oral reading fluency for five countries are as follows:

The largest gap in oral reading fluency in percentage terms is in Jordan where girls in Grades 2 and 3 on average are outperforming their male classmates by 46%.  The gender gap in Ghana and Tanzania is much lower than in Jordan, even though overall performance is comparable in the three countries (ORF on average in all three countries is around 23 to 27 cwpm).  That the gap measured in grade 3 in the Philippines is higher than the one measured in grade 2 in Indonesia, and similarly when comparing Ghana and Tanzania, leads one to question whether the gap increases as students advance from one grade to the next.  Jha and Pouezevara reference a longitudinal study in the U.S. that shows that in fact the amount by which boys underperform on reading compared to girls increases from kindergarten to grade 3, and continued to increase all the way to grade 8 (pg. 5).

When looking at how girls and boys perform in reading based on other factors – e.g., whether they attend pre-school, whether they are correct age for grade, and family socio-economic status (SES) – we find interesting patterns across the same five countries shown in the table above. The chart below summarizes the results of these analyses.  Several patterns in the data are worth discussing. 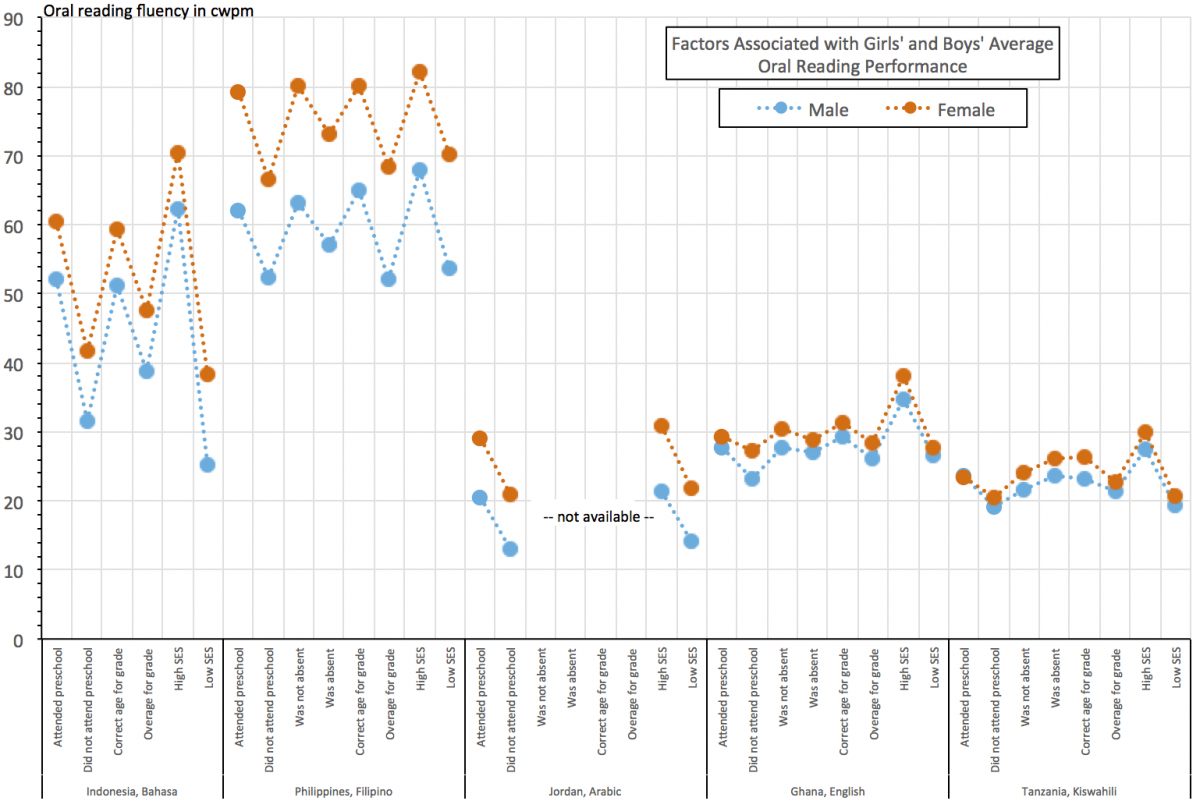 In Indonesia, the Philippines and Jordan, the difference in the average performance of girls compared to boys is fairly consistent across the various sub groupings of students.  In other words, in each country and category (attending pre-school or not, correct age for grade or not, high compared to low SES), boys underperform girls by almost exactly the same amount.  In these cases, it is surprising that a key factor such as attending pre-school or being from a higher SES family, does not “eliminate” the underperformance of boys in reading.

In these cases, it is surprising that a key factor such as attending pre-school or being from a higher SES family, does not “eliminate” the underperformance of boys in reading.

This is less so the case in Ghana and Tanzania, where the gender gap in overall performance is considerably less.  For example, in Ghana, the gap in performance for boys and girls who attend preschool is only 1 cwpm (4%, but not statistically significant).  Boys who do not attend preschool though underperform their female classmates who also did not go to preschool by 4 cwpm (17% and significant).

Another interesting result of this analysis is that in some cases other factors prove more important in determining outcome than just gender.  For example, in Indonesia girls who do not attend preschool on average had lower oral reading fluency than boys who do.  And even more so, girls from low SES status households perform well below their female classmates from high SES homes, but also perform well below boys’ overall average performance (Low SES girls had average ORF of 38 cwpm, compared to boys’ overall average of 52 cwpm). Similarly, being overage for grade seems to be an important determining factor in both Indonesia and the Philippines. In fact, overage boys in the Philippines had the lowest average ORF.

To see how these factors when combined compound disadvantages of certain groups of students, we conducted one other analysis. Using logistic regression, we tested how likely a student was to be in the top quartile of performance in oral reading fluency for the students tested in each country.

Underperformance of boys in reading achievement in early grades indicates that part of the issue may be that boys are socio-culturally less well adapted than their female classmates to the in-school behaviors and routines that are needed to learn to read well.

What does all this mean?  When thinking about gender advantages or disadvantages in education, the literature review asks us to reflect on ways that boys may be disadvantaged in school when compared to girls in terms of the learning outcomes they are able to achieve.  The analysis of EGRA data discussed here and in the report confirms that in some countries boys are underperforming compared to girls.  And in countries where performance overall is higher, like the Philippines and Indonesia, the gap between boys and girls is quite large.  In countries where overall performance is low, say in Sub-Saharan Africa like the two examples shown here, there is little to no difference in boys and girls reading achievement.  Does this indicate that in education systems that are able to ensure relatively better structured classroom environments, that boys, because of the way they are socialized, may become more disadvantaged?  The data thus far do not support such a conclusion, but they certainly give us reason to pose that question. Underperformance of boys in reading achievement in early grades indicates that part of the issue may be that boys are socio-culturally less well adapted than their female classmates to the in-school behaviors and routines that are needed to learn to read well.

Our data analysis also highlights other factors that influence children’s level of performance, chief among those being their family’s socio-economic level, but also whether they get to attend pre-school.  And when factors that disfavor children in the early years of school – not getting to go to preschool, being overage, and missing school – are combined with their families’ wealth status and the child’s gender – we can see dramatic compounding of disadvantage. [It is evident that variables such as wealth, attending preschool and being the correct age for grade are likely highly correlated. That in fact is the point – for some children these factors all come together to compound their disadvantage.]  Boys from low income families who do not attend preschool, who are overage and who miss school may be the most severely disadvantaged group when it comes to being able to learn to read well in the first few years of primary school.

[1] The reports and datasets for each country’s EGRA results shown in this post can be found on shared.rti.org using the Country search tab or using the direct links below.

Joseph DeStefano is the Director for Policy, Systems, and Governance in the International Education Division within the International Development Group at RTI International. His interest and expertise focus on project design, management, and support, as well as research, data analysis, and evaluation. He has experience with a full range of K–12 education issues—from teaching and learning to teacher professional development, school-community relations, finance, policy, and system reform. Mr. DeStefano has provided policy analysis and data support to US school districts and ministries of education throughout the developing world. He has also conducted extensive research on school effectiveness, community-based approaches to education, education reform, teacher supply and demand, school district finance, governance and management, human resources best practices in school systems, and development assistance modalities.
Contact Joseph DeStefano