Creating Gender-Fair and Inclusive Educational Television Episodes in the Philippines

August 26th is International Women's Equality Day around the world. However, achieving equality for women isn't just an issue for "grown ups". Sensitizing children about gender equity and inclusion in the context of everyday media messages and educational resources helps the learners appreciate diversity and alternative gender roles at an early age. At a time when educational television is taking on increasing importance with school closures and hybrid or remote learning, ensuring that this media is attentive to gender and social inclusion (GESI) is an opportunity reach more young children with positive messages and set the foundation for gender equity in the future.

Educational Television in the Philippines

Young children are at a disadvantage during school closures because they lack the academic and self-regulatory skills required for self-directed learning using printed modules. These foundational years are critical to future success. When schools in the Philippines opened again in October 2020, after nearly 6 months of closure due to COVID-19, it was anticipated that education would be delivered remotely until a vaccine would be available. Given this decision, the Department of Education (DepEd) rapidly begain to convert curricular materials and lessons to a range of alternative delivery modalities, including Educational Television (EdTV). DepEd TV is a partnership between DepEd and a professional production company (ei2Tech) that trained teachers to be broadcasters, and assembled teams of production experts to develop episodes for every grade and subject. The USAID-funded All Children Reading (ACR)-Philippines project, implemented by RTI, supported this effort financially and materially by sponsoring episodes for Grades 2 and 3 English and Filipino literacy lessons, and providing quality assurance. 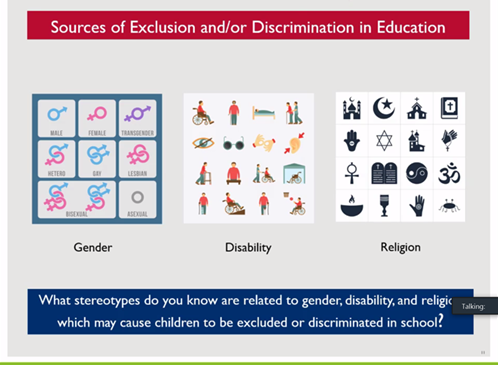 One important contribution to quality assurance was paying special attention to GESI in the draft and final productions. In May 2021, ACR-Philippines delivered a webinar-style training event on creating gender-fair and inclusive educational television shows for 52 teacher broadcasters who have been developing programming for kindergarten to Grade 3. The objective was to strengthen their capacity to notice and address gender equality and inclusion concepts in EdTV scripts, and ensure that their programs do not perpetuate potentially harmful stereotypes or exclude certain children. This training will be offered again in late September, to a new cohort of teacher broadcasters.

This is an important step to breaking harmful norms and stereotypes and protecting the rights of both girls and boys to a well-lived life filled with opportunities regardless of their context and background.

The webinar used DepEd’s Gender-Responsive Basic Education Policy (DepEd Memo #32 s2017) as a guide, as well as the USAID Guidelines on Gender and Disability. All participants were given a checklist to help them look for and address gender balance in all graphic illustrations and ensure that alternative gender roles are presented in stories and other texts. For example, are household chores shared among men and women; are girls being depicted as weak and boys as heroes; do texts and images portray girls and women being dependent on men and boys?

A safe place to discuss

The webinar used presentations, a video, a case study, discussion, and breakout groups in which teachers shared their own episode scripts and discussed elements of gender and inclusion as originally portrayed. In these small groups, participants felt comfortable to comment on each other’s work and discuss these sensitive topics. The participants found the checklist developed from the USAID Guidelines helpful in ensuring that their scripts and lesson plans are more gender responsive and inclusive in language and illustrations as well as in promoting transformational roles across different groups. They also shared that it is a challenge for them to discuss with younger children certain matters related to disability inclusion, gender identity, and sexual orientation and thus, would like to know more about possible strategies and techniques which they could use in developing their teaching and learning materials.

I learned a lot from this webinar. It made me realize that in every lesson we taught, we should be gender sensitive. There should be equality of rights.

It was a very informative discussion. I hope that you will conduct more activities like this.

I am now open-eyed that I have to make sure that my episodes are gender sensitive and inclusive to learners to avoid discrimination by understanding and accepting the multiple differences between men and women; to generate respect for the individual regardless of sex, and lastly, to develop a sense of belonging in society.

Examples from before and after GESI review.

Below are some examples of how the quality assurance process helped to identify areas of improvement in these English language lessons. 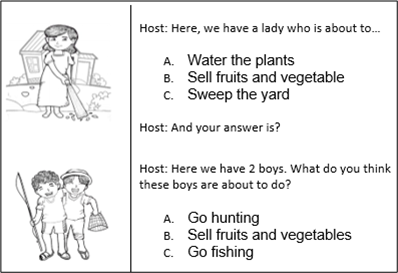 Above: The original storyboard for the episode showed a woman sweeping the yard and two boys going fishing, in the context of an English language lesson.

Below: The final episode switched the roles. It can be viewed on the DepEd TV You Tube channel: http://bit.ly/depedtelevision (Grade 2 Eng Q2 Ep6). 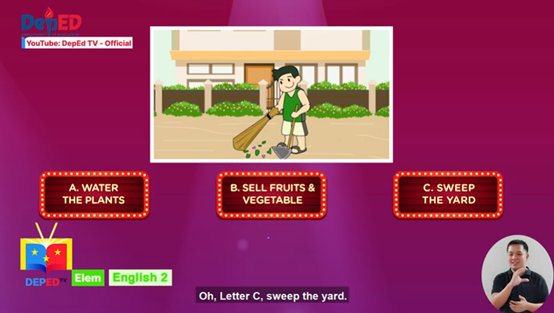 ACR-Philippines has supported the production of 16 episodes so far and has supported quality control of dozens more. To further support the reach and effectiveness of all DepEd TV episodes, ACR-Philippines is commissioning Filipino Sign Language (FSL) interpretation, closed captions, and translation/dubbing into mother tongues for an additional 250 episodes targeting K-3 learners.  Additionally, we will work with the TV producers to adapt television episodes as radio-based instruction suitable for individuals with visual impairments or lack of devices to watch DepEd TV episodes.

This work was led by Maria (Phil) Perlita De Leon, Education Research Officer at the All Children Reading Project based in Manila.  This blog was originally submitted as a Success Story brief to USAID, and was cowritten by Phil De Leon and Sarah Pouezevara.

Ms. Sarah Pouezevara is Senior Research Education Analyst and eLearning Specialist with the International Education Division of RTI International’s International Development Group. She has expertise in adult learning and training with a special focus on teacher professional development, including using Information and Communications Technologies (ICT) for training. She applies this expertise to designing innovative approaches such as mobile learning, open and distance learning, and communities of practice to increase impact of international education project through monitoring, evaluation, and learning. Ms. Pouezevara has led program evaluations for international NGOs in the education and health sectors, and has been the lead or co-author on several practical research reports and reference manuals, including state-of-the art reviews of mobile learning, one-to-one tablet computers, massive open online courses (MOOCs) in education in developing countries and has co-authored EdTech Ecosystem Reviews of 5 countires.
Contact Sarah Pouezevara