This report examines available evidence from the Asia region on the current state of ECE interventions, focusing on the 10 countries in the region3 that currently benefit from US Agency for International Development (USAID) education programming. In Asia, many national governments have prioritized the expansion of access and quality improvements of pre-primary education (Sun, Rao, & Pearson, 2015). USAID will support those efforts as part of a coherent approach to improved learning outcomes in primary school.
Download (872.8 KB) Preview
Tweet

Given the dearth of research on early numeracy interventions in low- and middle-income countries, this paper presents the instructional methodology and impact results of the Tayari program. Tayari is a preprimary intervention in Kenya (2014–2019) that prepares children aged four and five for entry into primary school by providing materials for students, training for teachers, and continuous in-classroom support. The Tayari methodology was built on the Kenyan government’s preprimary syllabus to produce instruction that was developmentally sequenced, linked to out-of-school experiences, and supportive of children’s number sense. Tayari was evaluated using a randomized controlled trial (RCT) and collection of longitudinal data from 2,957 children in treatment and control schools at three time points. Pupil assessment items were drawn from a growing body of research on preprimary numeracy in developing contexts, plus instruments and techniques from the Measuring Early Learning and Quality Outcomes (MELQO) program (UNESCO, UNICEF, Brookings Institution, & World Bank Group, 2017). The impact evaluation of the longitudinal RCT results showed statistically significant effects in the numeracy tasks of producing sets, identifying numbers, and naming shapes, while revealing no initial effects in the areas of oral and mental addition. We present recommendations for Tayari’s improvement in terms of mathematics instruction, as well as preprimary policy implications for Kenya and similar contexts.
Tweet

This paper explores an innovative assessment framework for measuring children’s formal and informal mathematical knowledge. Many existing standardized measures, such as the Early Grade Mathematics Assessment, measure children’s performance in early primary grade skills that have been identified by researchers and policy makers as foundational and predictive of later academic achievement (Platas, Ketterlin-Geller, & Sitabkhan, 2016; RTI International, 2014). However, these standardized assessments only provide information on children’s mathematical ability as it pertains to skills and concepts that are a focus of school instruction, referred to as formal mathematics. While valuable, they leave unmeasured the mathematics that children use and develop as part of their everyday life, such as the strategies they use to solve simple arithmetical problems that arise as they move through their day (Khan, 1999; Saxe, 1991; Taylor, 2009). In this article, we draw from mixed methods studies which focus on capturing the informal mathematical skills that children develop outside of school in various contexts (Guberman, 1996; Nasir, 2000; Sitabkhan, 2009; Sitabkhan, 2015). We describe how the use of observations of children’s mathematical activities in natural settings and in subsequent cognitive interviews using mathematical tasks derived from those observations, can illuminate mathematical knowledge and skills that may otherwise remain hidden. We found that an assessment framework that focuses on both standardized measures of formal mathematical learning and contextualized measures of children’s everyday mathematics can provide a more complete and nuanced picture of children’s knowledge, and taken together can inform the development of curricular materials and teacher training focused on early learning.
Tweet 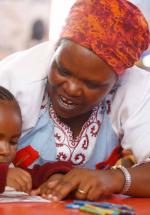 There is a large body of evidence substantiating the importance of mathematical literacy and the key role of foundational mathematics in early years of education on later academic outcomes (Duncan et al., 2007; Duncan & Magnuson, 2011; Hanushek & Woessmann, 2008; Siegler et al., 2012). Despite this, we have little evidence from low- and middle-income countries on how to better ensure that students are learning the foundational skills in pre-primary through lower primary grades. Given that quality of instruction is key, we examined the evidence for the types of instructional strategies used in low- and middleincome contexts. We cannot link the effective instructional strategies to learning outcomes, given the limited information provided in reports we reviewed. However, understanding which strategies are used, and how they manifest in different contexts, is an important first step to understanding which strategies are effective for learning. This brief summarizes our review paper (Sitabkhan & Platas, 2018).
Download (197.6 KB) Preview
Tweet 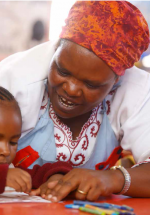 This paper examines common instructional strategies in early grade mathematics interventions through a review of studies in classrooms in low- and middle-income countries. Twenty-four studies met the criteria for inclusion, and analyses reveal four sets of instructional strategies for which there is evidence from multiple contexts. Of the 24 studies, 16 involved the use of multiple representations, 10 involved the use of developmental progressions, 6 included supporting student use of explanation and justification, and 5 included integration of informal mathematics. Based on the review, we provide conclusions and recommendations for future research and policy.
Download (326.2 KB) Preview
Tweet

This report presents the results of RTI International Education’s study on teachers' guides across 13 countries and 19 projects. Using quantitative and qualitative methods, we examine how teachers’ guides across the projects differ and find substantial variation in the design and structure of the documents. We develop a scripting index so that the scripting levels of the guides can be compared across projects. The impact results of the programs that use teachers’ guides show significant impacts on learning outcomes, associated with approximately an additional half year of learning, showing that structured teachers’ guides contribute to improved learning outcomes. During observations, we find that teachers make a variety of changes in their classroom instruction from how the guides are written, showing that the utilization of structured teachers’ guides do not create robotic teachers unable to use their own professional skills to teach children. Unfortunately, many changes that teachers make reduce the amount of group work and interactivity that was described in the guides, suggesting that programs should encourage teachers to more heavily utilize the instructional routines designed in the guide. The report includes a set of research-based guidelines that material developers can use to develop teachers’ guides that will support effective instructional practices and help improve learning outcomes. The key takeaway from the report is that structured teachers' guides improve learning outcomes, but that overly scripted teachers' guides are somewhat less effective than simplified teachers' guides that give specific guidance to the teacher but are not written word for word for each lesson in the guide.
Tweet

Instructional models in early mathematics: Can the "I do, we do, you do" model support the development of mathematical thinking? CIES 2018 Presentation

CIES 2018 Presentation, given by Yasmin Sitabkhan. The purpose of this presentation is to explore the applicability of the direct instruction (DI) model (also known as the “I do, We do, You do” model) for early grades mathematics instruction in low-income contexts through data gathered on two projects, the Tayari Early Childhood Project in Kenya and the Liberia Teacher Training Project (LTTP2). The results from the two studies point to the effectiveness of the gradual release of responsibility model for early mathematics instruction. The model as it is, with an explicit I do, we do, and you do” section for each concept, does not align with best practices in early mathematics instruction. However, the workshop model, which essentially is a “we do, you do” model, may foster more productive instruction that encourages critical thinking and problem-solving behavior.
Download (1224 KB) Preview
Tweet 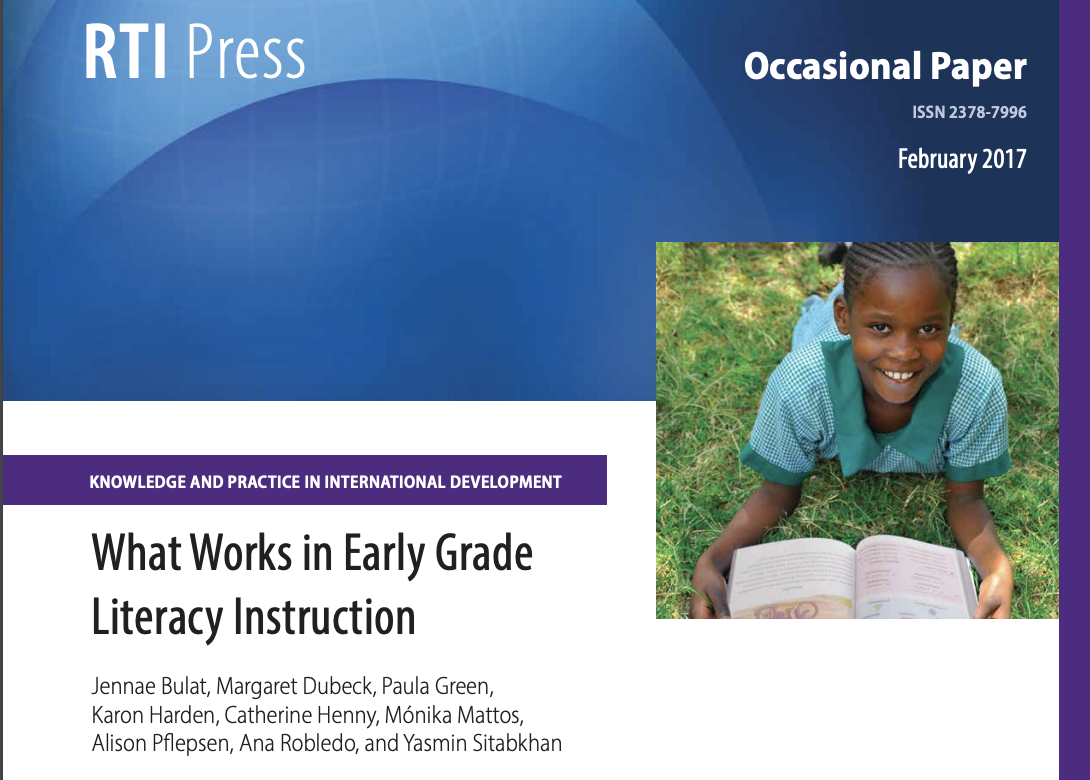 Presentation delivered at CIES 2017 (Atlanta). The Malawi Early Grade Reading Activity (EGRA), funded by the United States Agency for International Development (USAID) and implemented by RTI International, is designed to support the Malawi Ministry of Education, Science and Technology (MoEST) in improving the reading performance of Malawian learners in Standards 1–3. One of the primary goals of the Activity is improving the quality and availability of pedagogical materials for early grade reading; to do so, EGRA developed a teacher’s guide with scripted lessons plans (SLPs) for classroom teachers to follow when teaching lessons in both Chichewa and English. A goal of this study was to investigate teacher use of the SLPs in Standard 1 and 2 classrooms. EGRA included teacher training and in-class support for teachers as they used the SLPs. Teachers received several days of specific, targeted training each year regarding phonics-based reading instruction and the gradual release of responsibility model (I do, We do, You do). They also received theory- and practice-based training in the use of the SLPs to deliver high-quality instruction and practicum sessions during which they delivered lessons to groups of current Standard 1–3 learners. The purpose of this study was to shed light on how teachers were using the SLPs in their classrooms to better understand the ways in which the trainings and the materials themselves were supporting teachers, and the ways in which the trainings could be modified.
Download (5601.7 KB) Preview
Tweet