How a flashcard became a turning point for a community: A Simple innovation in reading assessment sparks magic in Uganda 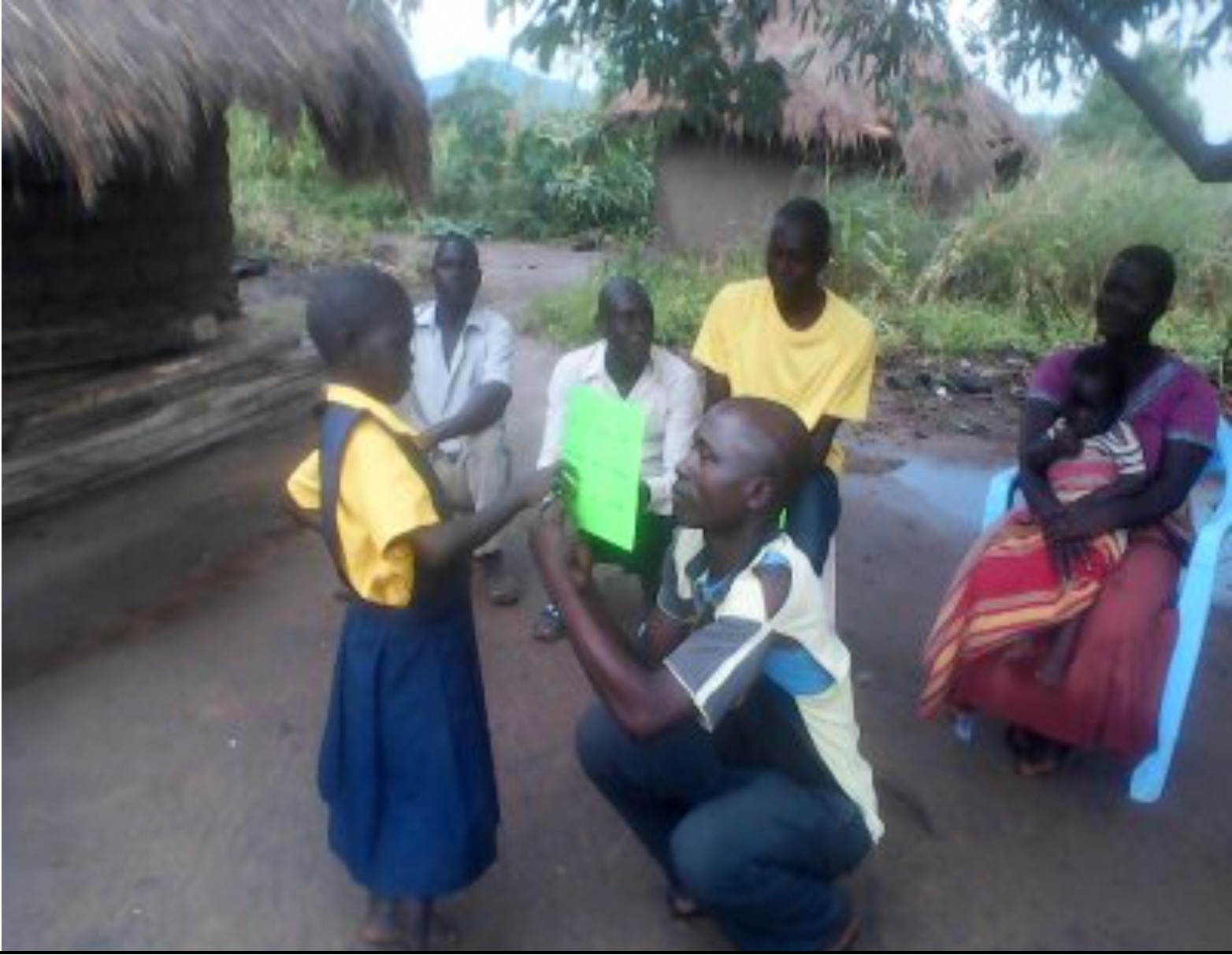 The USAID/Uganda School Health and Reading Program implemented by RTI has developed a system for getting school and community level information to program technical teams quickly.  Last week, a story came through the usual weekly reports that needed to be shared.

To increase parent participation and interest in their children’s learning, SHRP introduced flash cards for parents to assess their child’s reading. They were simple cards, developed in 12 local languages, with pictures on one side and a words on the other side, which could be used even by parents who couldn’t read themselves. Since the activity originated with the Monitoring and Evaluation team, there was hesitation since it wasn’t clear how SHRP could possibly monitor it (once the cards went home with parents, then what?).  But this story is an equally powerful measure of success.

Samson Mutere Abiyo, from Wurawa Village  in Arua district, during one of the school visits to attend the Parents Teachers’ Association (PTA) and School Management Committee (SMC) executive meeting had this to say, ‘I did not know that I can also test learners even when I do not know how to read and write’. Mr. Mutere is one of the parents whose children are in the school and he always wanted them to ably read and write, he also wanted to learn how to support them beyond providing scholastic materials, since he never went to school and this limited him in understanding whether his children were progressing in their learning.  During one of the SMC/PTA executive meetings on August 17th, the SHRP field assistant demonstrated the parent learner check using the flash cards.  Samson was so attentive because the cards were bright and he looked forward to the messages and actions that would follow.

Samson later volunteered to practice with the children in the meeting. This was his turning point when he discovered he could actually support his own children using the flash cards that have pictures of things used at home. This made it easier for him to know exactly whether the child he was testing read correctly, since he would hold the picture side of the card to himself and the word side to the child; if the child being tested read what was corresponding to the picture or not, he knew it was correct. Samson and all other parents later received copies of the flash cards to use at home in monitoring the reading ability of their children.

Mr. Mutere has been able to continue testing other children in his neighborhood and he has also transferred the skills to parents in his neighborhood. The head teacher has observed increasing interest of parents in teaching and learning of their children, they have promised to provide support to school beginning with their own learners’ necessary scholastic materials and visiting school to see and interact with teachers. There is increased lesson attendance as reported by the teachers compared to days before where they would play outside classroom; parents have become serious about their studies.

Illiterate parents are a bit afraid of how best to support their own children, flash cards used in the Parent Learner Check have provided room for parents to engage more with their learners.  Learning never ends and it is interesting how a flash card for parent learner check caused a turning point for the whole community, starting with one parent. "This story is worth sharing with other schools and communities", remarked Eunice Alum Opio, Senior Program Coordinator.

The USAID/Uganda School Health and Reading Program supports local systems and reading in 3,700 schools and was the catalyst for other reading programs which now cover 80% of all government primary schools.  For more information see this series of Results Briefs, or use the "by country" search on this website.

Dr. Tracy Brunette is a senior research analyst and specializes in harnessing research and learning to increase the impact of international development programs. She was previously Monitoring and Evaluation Director for the USAID Uganda School Health and Reading Program. She is now supporting cross-country work on teaching, learning, policy and systems with a focus on improving monitoring, evaluation, learning, research and adaptation processes.
Contact Tracy Brunette