This annotated bibliography, originally created as a supplement to a research poster, compiles the output from an RTI internal research and development (IR&D) award. Each fiscal year, RTI considers staff-submitted proposals for innovative products or services that would advance a field of research but are not likely to be covered by external sources, and selects some to receive IR&D grants. Beginning in 2016, staff of RTI’s International Education division took on the challenge of significantly increasing the unit’s internal funding, production, and publication of peer-reviewed research. The urgency was driven by three significant factors: (1) Omission from meta-analyses—During the previous 10 year period, several broadly distributed retrospectives were published on “what works” in learning assessment and improvement—none of which covered RTI’s extensive experience, because it was available only as gray literature (primarily reports for the United States Agency for International Development, or USAID). Thus, a decade of learning from the administration and analysis of Early Grade Reading and Mathematics Assessments (EGRA and EGMA), in particular, was not well accounted for. (2) Sustainable Development Goals (SDGs)—In 2015, the global community adopted the SDGs and began determining metrics to monitor progress. Unless RTI moved to publish its findings on potential use of alternative assessments, including EGRA and EGMA, country-driven approaches to measurement for low- and lower-middle-income countries could be excluded from options for monitoring and tracking progress toward the new global goals. (3) Absence of external funding—The primary sponsor of the relevant project work, USAID, did not have funding to support following up with additional analyses, particularly those involving multicountry comparisons. The IR&D award responded to these gaps. As led by Dr. Amber Gove, the primary intent of the effort was to ensure that the Institute would lead the field in using and disseminating EGRA and EGMA data, the majority of which RTI had collected and analyzed. The IR&D funding covered multiple years, and the result by late 2019 was 16 peer-reviewed publications, with several more submitted and under review. Some key lessons learned during the process—as reflected in the listed works—were: (1) Start with client-funded reports and analyses; (2) pair first-time authors with more experienced writers; (3) ask key questions across countries and/or languages; (4) collaborate with colleagues from other organizations; and (5) prioritize broad (open) access. More information: Amber Gove, e-mail: agove@rti.org; Twitter: @AmberGove 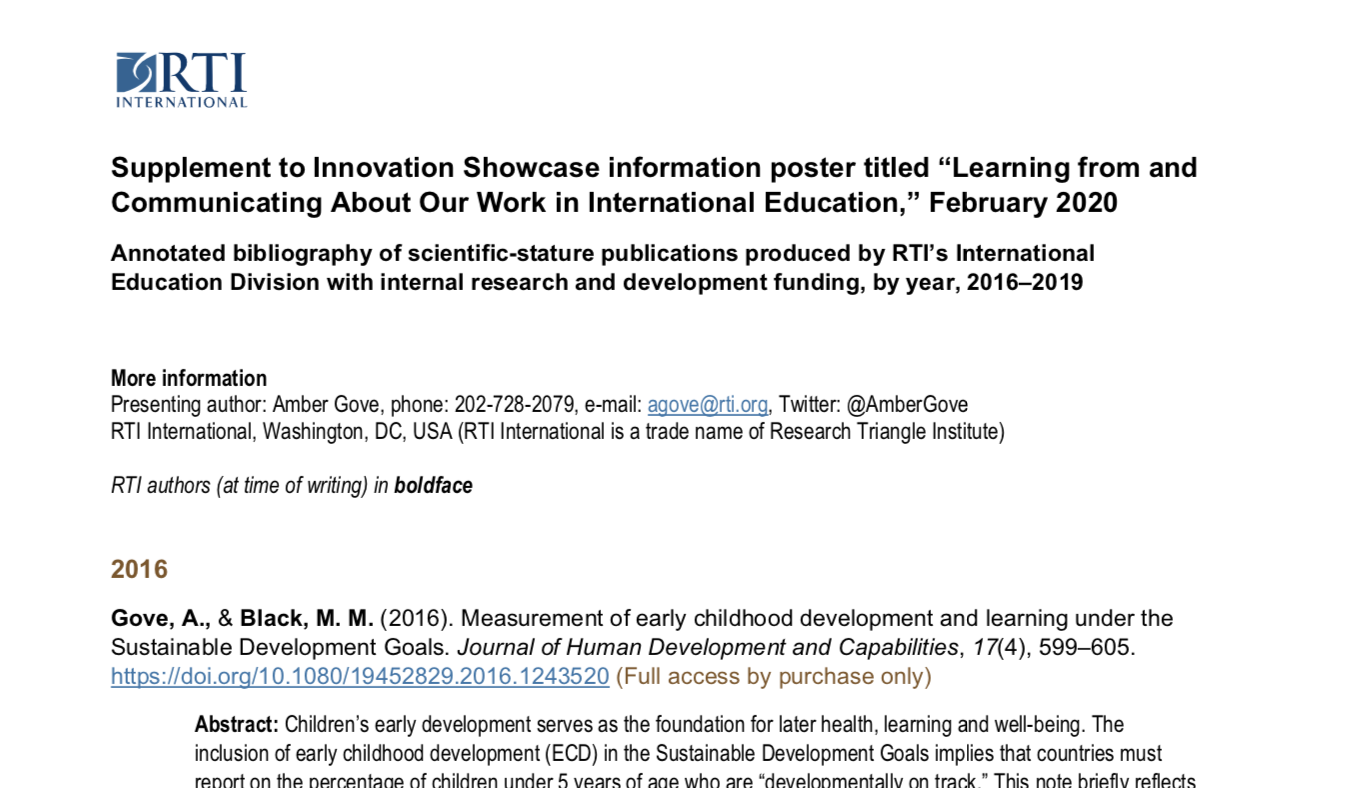 The Early Grade Reading Barometer: Increasing access to and use of data on learning outcomes- CIES 2018 Presentation

CIES 2018 Presentation, given by Amber Gove and Helen Jang. The Early Grade Reading Barometer offers a wealth of actionable Early Grade Reading Assessment (EGRA) data to help to change the lives of young children. With 40 datasets from 19 places, the Barometer supports data transparency. The Barometer is designed for USAID education officers, policy makers, education staff in host countries, implementation partners, education researchers, and practitioners. It is designed primarily for users who may have limited knowledge about early grade reading, and no or little sophisticated statistical knowledge. This presentation was an interactive demonstration of the Barometer, highlighting the vast amount of data available to the public and how the information can be used to improve learning outcomes.
Download (1780.2 KB) Preview
Tweet

Measures of quality through classroom observation for the Sustainable Development Goals: Lessons from low-and-middle-income countries

Background paper prepared for the 2016 Global Education Monitoring Report Education for people and planet: Creating sustainable futures for all With the adoption of the United Nations General Assembly’s Sustainable Development Goals (SDGs), global education agencies are grappling with how quality can and should be measured for global reporting purposes. Several factors at the education system, school, and classroom levels shape education quality, including the limited information available at the global level about what is happening in the classroom. Such information can only come through observation-based measures that record teacher practices, either through routine monitoring conducted by system actors or through surveys. Classroom observation is used extensively in not only teacher education and professional development, but also in evaluation studies. However, there are fewer cases where classroom observations are used for system monitoring purposes—particularly in low- and middle- income countries. This paper reviews what has been learned from observation instruments in low- and middle-income countries and what opportunities (i.e., scope) there are to systematize these countries to that they can monitor quality at both the school and system levels.
Download (1487.7 KB) Preview
Tweet

CIES 2017 Presentation: Measurement of early reading under the SDGs

Measurement of learning is central to the Sustainable Development Goals for education, both in early primary (grade 2/3) and in early childhood (under the age of 5) (IAEG 2016). Of particular concern is the ability of global measurement approaches to reflect the social and linguistic differences of a diverse range of societies, including traditionally marginalized groups. This presentation relies on literacy assessment data to answer the following question: can results from non-equated national assessments be used to report against global goals?
Download (1603.2 KB)
Tweet

What Have We Learned? Improving Development Policy through Impact Evaluation (Presentation)

From the CGD Website on the event: "Please join the Center for Global Development (CGD) and the Abdul Latif Jameel Poverty Action Lab (J-PAL) to take stock of the evidence and impact evaluation movement and its promise for improving social policy in developing countries. In 2006, CGD released a working group report titled “When Will We Ever Learn? Improving Lives Through Impact Evaluation.” It described an evaluation gap and proposed an international effort to systematically build evidence on “what works” in development with the aim of improving the effectiveness of social programs. Ten years later, we will reflect on progress toward these goals. Despite a host of challenges, hundreds of millions of people across the world have benefited from programs that have been rigorously evaluated and scaled up. Impact evaluation has generated knowledge about poverty and public policy leading to better programs. At the event, policymakers and evaluators will discuss examples of how evaluation has helped enhance effectiveness, and a panel of evaluation funders will reflect on lessons learned and the way forward. In a time of political transition, we seek to re-energize the movement for increased evidence and value for money in public and aid spending. Among others, the event will feature: Abhijit Banerjee (MIT), Amanda Glassman (CGD), Rachel Glennerster (J-PAL), Markus Goldstein (World Bank), Amber Gove (RTI International), Rema Hanna (Harvard), Emannuel Jimenez (3ie), Michael Kremer (Harvard), Darius Mogaka (Government of Kenya), Santhosh Mathew (Government of India), William Savedoff (CGD), and Bambang Widianto (Government of Indonesia)." Download the presentation slides from the Kenya case study using the "Download" link, or click on the external website link for more information on the event.
Download (697.4 KB) Preview
Tweet

Article published in the Journal of Human Development and Capabilities Volume 17, 2016 - Issue 4: Investing in Early Childhood Development. Published abstract: "Children’s early development serves as the foundation for later health, learning and well-being. The inclusion of early childhood development (ECD) in the Sustainable Development Goals implies that countries must report on the percentage of children under 5 years of age who are “developmentally on track.” This note briefly reflects on the history of global ECD goals and their measurement and outlines the challenge ahead: creating a workable strategy for ECD measurement that balances the need for national relevance with globally comparable data. The global variation in the timing and nature of early childhood skills acquisition presents an important opportunity as countries set their own standards for what it means to be developmentally on track. Country-driven measurement and standard setting, derived from measurement approaches that meet international expectations for quality, can have an important influence on policy and practice. Countries can measure the development of their youngest citizens in a way that is most relevant and useful to them, so that they may use those data to ensure that all children have the opportunity to fulfill their potential."
Tweet

This article reviews the development of the EGRA and EGMA, which are locally tailored, timely assessments designed to directly inform policy and instruction for learning improvement, particularly for countries on the lower end of the income spectrum. The history of the design and implementation of the tools as well as case studies of their use in Egypt and Kenya, are a useful counterbalance to the experience of the more traditional international large-scale assessments (ILSAs) documented in this special issue—in particular for understanding the needs of countries struggling to transform ‘education for all’ into ‘learning for all’.
Tweet

Article published in the International Journal of Educational Development. Volume 40, January 2015, Pages 315–322. Published abstract: The rise and widespread adoption of the early grade reading assessment (EGRA) has produced an ample supply of critics and converts. This paper seeks to clarify the purpose of EGRA and its limitations. EGRA was created to inform education systems and programmes and alone, is not an intervention. Designed to measure some of the foundational literacy skills that readers need for beginning reading, EGRA is a collection of subtasks, each with a specific purpose. This paper includes a description and rationale for each subtask, as well as the conceptual framework that underpins the assessment. Key results from multiple surveys provide informative, grounded examples of how the assessment results are being used to inform both classroom practice and system-level policy. We conclude with a brief discussion on the potential uses of EGRA and similar oral assessments of early learning for informing the monitoring of the post-2015 education indicators.
Tweet

Early Reading: Igniting Education for All. A report by the Early Grade Learning Community of Practice

Learning to read is a fundamental part of the first few years of primary education for early and sustained success in school. Yet, in many developing countries, a distressing number of students are not learning to read at all during these critical first years of schooling. On September 8, International Literacy Day, the Center for Universal Education (CUE) at Brookings and the International Reading Association hosted a discussion on how ensuring literacy in the early grades can help to fulfill the promise of quality education for all. Amber Gove of RTI International presented the findings from the attached report “Early Reading: Igniting Education for All,” which represents the work of a community of practice that has been developing and refining assessment tools, piloting interventions, and sharing practices for scaling up these proven methods of improving literacy. Following the presentation, USAID Director of Education David Barth and International Reading Association President Patricia Edwards and Jamaica Teachers Association General Secretary Adolph Cameron joined a panel discussion on the paper’s findings. This revised version, with additional data and evidence from early reading interventions, was released in May 2011.
Tweet